We’ve been in Colorado for the last couple weeks and we’ve seen some spectacular scenery.  At the Red Rocks Amphitheatre, even my Cannon’s 18mm wide angle lens simply couldn’t take it all in. 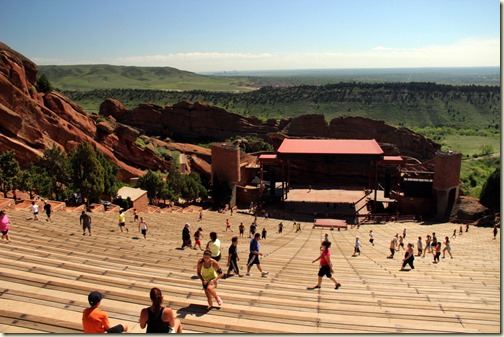 So I decided I needed a panorama – multiple pictures taken from left to right that I could stitch together later with the computer.  First of all, here’s a little tip: since this is going to end up as a very wide picture, you need as much height as possible.  For that reason, I take the multiple pictures in portrait mode:

Using Picasa’s Collage to stitch the Panorama together.

In this past article, I wrote about how to use Picasa’s Collage feature to manually stitch these pictures together.  Unfortunately, this just doesn’t turn out so well.  You can see where the original pictures were taken by the difference in the lighting.

Using Windows Photo Gallery to Stitch the Panorama together.

Windows Photo Gallery is a free download from Microsoft.  It is a photo management program, much like Picasa.  There are some things about it that I like better than Picasa – such as this Panorama stitching feature.  It doesn’t have some of my favorite features from Picasa though, so I have no intention of switching over from using PIcasa all the time to using Photo Gallery all the time.  There is no reason why you can’t have both because they are both just tools that work on the pictures located on your computer.  Think of it like taking your car to different mechanics that have different specialties.

To make the Panorama, I open Photo Gallery and find the pictures I took by navigating to their folder, then selecting them.  You can select multiple pictures just like in Picasa, with the Ctrl-click technique.  Once the 6 pictures are selected, choose the Create menu and Panorama, then just wait. The processing takes a minute, but it’s all automatic. 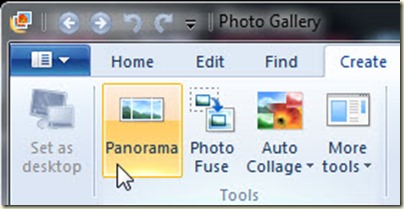 Once the stitching process is complete, you will be prompted for a folder location to store the resulting panorama picture.  You should probably choose the same folder where the original pictures are located.  In any case, as long as you choose a folder that Picasa is watching, when you open Picasa the next time you will see this picture that Photo Gallery created.  You can then use Picasa’s tools to crop it, frame it, add a caption, add text on the picture, etc. etc. And, even share it by Uploading to Google+ / Picasa Web Albums.

Earlier this month, Google announced some new features for Google+ Photos.  One of these is called Auto-Awesome.  The idea is that if you upload a series of photos that are recognized as being for a specific purpose, Google+ will automatically put them together.  There are 3 specific purposes for a series of pictures:

I was very excited to hear this news and immediately uploaded samples of each type of series.  My results were not so exciting.  There is nothing you can do to make this feature happen.  Your sole job is to upload the appropriate series of pictures and Google+ is supposed to Detect them and operate accordingly.  I uploaded:

The results were disappointing.  Neither the action series, or the HDR series were detected at all, and only the red rock panorama was detected.  Even with Red Rocks, it only used 5 of the 6 pictures in the series to create the panorama.  Auto-Awesome is only automatic, there is nothing I can do to specify pictures for the awesome features!

For now, I’ll stick to Photo Gallery for my panoramas, but I will definitely keep trying with the auto-awesome features of Google+.  After all, it was just released this month, I’m sure there will be some improvements ahead.

Geeks on Tour Members might also want to watch the tutorial videos on how to make Collages,

This tip brought to you by Geeks on Tour

Geeks on Tour is a membership website with hundreds of Tutorial Videos on topics of interest to travelers, such as managing digital photos with Picasa, Route-Planning with Streets and Trips, and sharing your travels with a website using Blogger or with friends on Facebook. You can subscribe to our free e-newsletters, or become a paid member and be able to view all of the videos in the Learning Library.

Chris is a teacher. Although she comes as close to an expert as possible in many areas of computer usage, she can still remember what it's like not to know these things! That means she can communicate with students in a way that teaches and doesn't demean. She really enjoys teaching one-on-one and for groups of people, but she reaches a worldwide audience with her tutorial videos on the GeeksOnTour.com website. She currently travels the country in an RV with her husband, Jim. As Geeks on Tour, they present computer seminars at RV rallies, computer clubs, and Senior Centers all over the US. View all posts by geeksontour